Should Armstrong get his 7 Tour de France titles back? 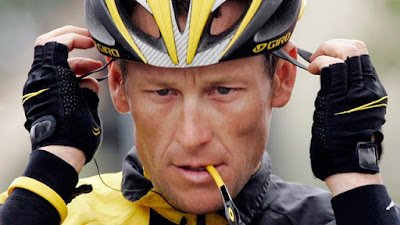 There has been a discussion and disagreement on this topic among millions of people into road cycling. You know when Lance Armstrong won the Tour de France race in a 7 times row, people all got attracted to the energy of this success story and road cycling was at a point that it had never been at that top level before.

It was amazing to watch (even bet!) a person with a cancer condition in his past, beating and defeating all the top riders of the world in each year, it was all fun! But then the bitter fact came out and hit many people's faces. Well what were you all expecting after all? A clean guy showing up on his bike and beating all the other big cycling names while drinking milk? Hmm, maybe that gas caused by milk might have helped him!


If you know some road cycling, you also know the fact that  almost all the big names dope. If you deny this, then it means you haven't learned anything about road cycling or you have been playing the deaf. If all are doped, why Lance Armstrong who inspired zillions of people and attracted countless people to cycling from trash disciplines like soccer? Because he had the biggest title, 7 years in a row, caused jealousy. Give him a break man. There is no difference of his being doped and the rest of the riders. He had a better training and dedication to win, besides all the system of his doping usage continuously. It is NOT the drugs' types he used, helped him to win 7 times. They all use same EPO and doping agents, got it?

And thinking I am defending the unclean riders would be a total misinterpretation. All I say is almost none of the winners are clean, so why bother choosing a scapegoat and ruin this rising sports. You should accept that professional road cycling has never been clean and is not going to be clean while it has been so popular.

Check out this page from wikipedia and learn it has been there on the courses since 1886!
It is a long page with dozens of name in it in many cases.

You want names? Here it is. All in same year of 2013. What did I say? They all use same doping substances, which are majorly EPO and testosterone; 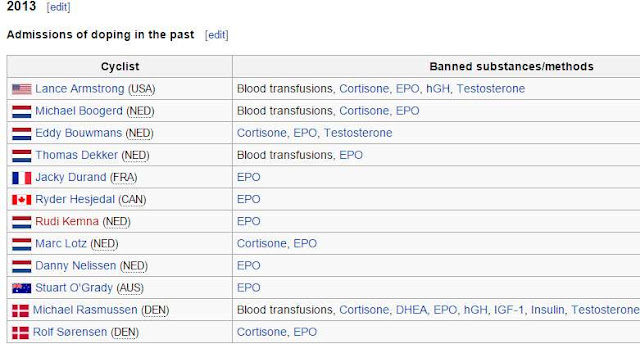 It is proven, if you see a winner in Tour de France, you do not need to question of his being clean or not, he is doped, period. If their tests haven't been positive yet, it means that they have used these doping agents during their earlier training times. So let these guys ride their bikes in equally by accepting the fact that they all are doped.