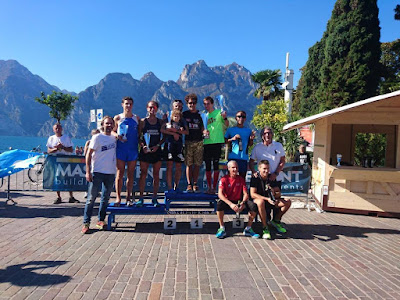 I had been wanting to update my marathon pb (previous one was 2:45 in Leipzig) for a long while. I knew that this wouldn't be able to happen in my country's limited races (only 4 in whole year, 2 of those are hilly) with no cheerful local audience. So I needed to find a race abroad but where? 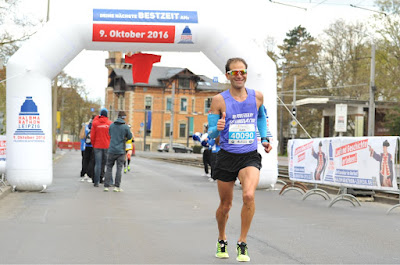 I had heard about the Lake Garda Marathon from a sub3 hour marathon runner when I asked about fast courses within Europe in October. Italy was one of the countries I would love to visit (even to live!) So, this answer excited me and I started to research online about this race, the location, the results from previous years, participants etc.

I had made my mind and I was going to join this race myself anyway but my fastest trainee could benefit from this fast course to make his dream come true; His first sub3 hour marathon! Later, we formed a 4 runner group to run this race, yay!

Knowing a race is going to happen for the 11th time sounds good for the newcomers. When I asked the organizer of the race if they could cover my race fee as a sub-elite level runner, they said "sure". Perfetto!

So we formed a group of 4 runners (2 of my trainees, a friend of us and myself), booked the flights, the hotels, flew to Milan Bergamo with no experience about Italy. We stayed in Milano one day, then took the train to Peschiera del Garda, got on a bus to Garda, then hopped on another bus to our final destination Malcesine. There was a similar climate to our hometown Izmir (westmost of Turkey), so we liked the weather there.

Marvellous place, Lake Garda, it was like eden, even in October

When we arrived at Malcesine (where the race start was), it was an awesome feeling for us to see the nice view of Lake Garda and the race course! My trainees and I were glad about where I had booked our stay; An apartment house only 200mt from the start point! It's really important where you stay for your marathon. It should be either nearby the start or the finish line.

The race was crowded with 30K and full marathon runners, not the most crowded one though but good quantity of participants for such a race with no money award for its winners. The weather was nice, not too cold or too hot. The race kit pick up place was the same place with the race start, 2 minutes walk from our apartment. The pick up was quick and smooth. We even bought a race tee (aside from the jersey given for each registered runner) as a souvenir.

It was chilly in the morning of the marathon. We were so happy that we didn't have to leave our house till the last possible time. We dropped our bags easily, then started to jog and take pee breaks few times. I was in the first row at the start line, how nice! We started as the leading pack of 7 runners. I stayed in the back most of them, as their starting pace was faster than my usual but I didn't want to let them go and run on my own right from the beginning. Silly me! I usually let everyone go, check my pace and effort, go progressive and enjoy taking each runner who has started off too fast.

This time it didn't happen. Maybe running in a new course in a cool morning, rather downhill or very slight uphills (never hurts me as a good hill runner) in the first kilometers or overconfidence! might have prevented me to run my own race. There was a leading guy way ahead of our pack whom we caught around 6k point. Then as we covered more distance, our positions started to change, I still tried to remain as either 6th or 7th of 7 runners. When we arrived at the turning point ( I think it was 13.5k), some of us increased their effort, some remained same. After a short while, I found myself behind one guy, trying to stay behind him. Wow! This is not a half marathon, something must be wrong!

At km 20, I eventually had to let him go and started to run my race at my own effort. The course was perfectly set to let the athletes run in the shade of the mountain when the sun and the increased temps started to hit in the second half of the race but still the heat and the dehydration affected me. Why?

The fast start and dehydration paid itself in the second half with stiffer legs. I was like just moving my body ahead, that's it, nothing more. But, hey I'm a sub 2:50 marathon runner with a 2:45 PB and I came here to better my time! Nice comments from the audience (as well as some 30K runners I passed by) gave extra motivation for sure. "Dai dai!"

Oh, few slower 30K runners were laughing at my running style, probably after I lost my running form with my stiff legs. Sorry guys, they don't give any points from the running form, so when you run the full marathon, you're going to learn it from the first hand :)

I passed few tunnels, it was good and interesting feeling to pass through those dark and cool places. When I was around 40K point, the music and the announcements of the finish place was clear. It was motivational to keep you run further at that point. I like it! The finish line was nice, right in front of a church, next to Torbole beach of Lake Garda. I wish the water was hot to jump in but we were there to run 42.2km, so the outside temperature mattered more than the water :) 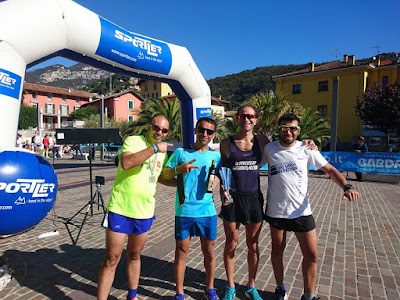 My trainee achieved his 1st sub3h marathon, my other trainee completed his 1st 30K race, I got my marathon PR, therefore we were all happy :)

The fruity tart was delicious post race snack along with isotonic fluid and water. I placed 4th overall and my trainee achieved his first sub 3 hour marathon while placing 7th, even receiving a bottle of local olive oil! Yay! :) 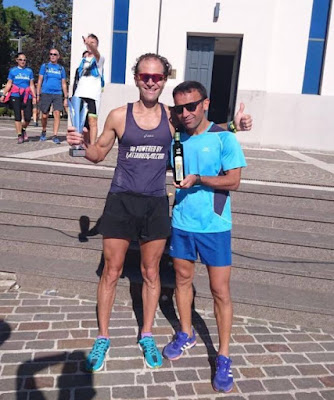 They provided a free return ticket to take the ferry to Malcesine (the start), it was good to view the Lake and its surroundings among dozens of exhausted but happy marathon finishers :)
Thank you for putting your effort to organize such a nice race in one of the best places a runner can travel to and compete.