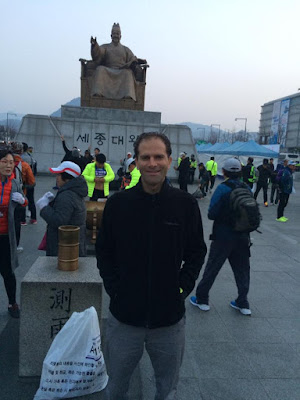 It was a very long and cold winter I had to deal with. As a person having moved to Seoul from a very warm, sunny mediterranean city and having around 9% of total body fat had made me feel like I was living in an igloo with a bare body. 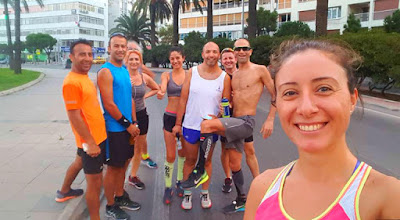 Back in my hometown, this was the way we used to dress for running even at 5-6a.m. in the morning

That's why I couldn't have had a higher mileage, nor had enough long runs before the race. But this was a marathon! You cannot just jump to the start line with no long run under the belt and enjoy the entire the race. You would suffer without an enough long run, I guarantee it. So I had to squeeze my last long run (40km) on Monday within the race week, which was nonsense to many experienced runners. Well, as a running coach, I should remind every runner to focus on the running amount of time, rather than the distance. If one thing I've mastered was the marathon training, the other one was the flawless recovery as I like to pay attention on countless details taking important place in running. Also, the deep tissue sports massage I had (thanks to my girlfriend) the day before the race helped me to recover quicker and felt me stronger. So, I did everything I was supposed to before the race and showed up at the race area as the first member of the SeoulFlyers running club of which I became its fitness director in the last months.

Everything was looking like being organised well. How couldn't it be? It was the world's second oldest marathon after the Boston. Even the A, B, C, D, E runner sections' guides were at their locations 1.5 hour before the starting time. I had read that the trucks for the bag drop would promptly leave at 7:30 a.m. I stripteased and dropped my bag 1 hour 15 minutes before the start. I was shivering in my super breathable race singlet! until Sarah offered to give her jacket to me. How nice she is, as being cheerful as well. We had our group photo, then I wanted to accompany my hardworking trainee David to make sure his pre-race routine was in the way it was supposed to be. So we dropped his bag, waited in the line for the toilet, then did a 1 mile easy warm up on the concrete sidewalks around the race place. We wished luck to each other and I went to the A corridor, found a good spot among many fast runners. Oh, I've forgotten to put my heart rate band that I've left in my bag on. It's late to go back and run after the trucks that were already left. While waiting for 20 minutes there, I knew that my need of going to pee was going to become an issue at some point of the race. In few races in the past, I could have peed while running but that kind of multi tasking wasn't fun and not easy either!

So, I changed the plan, skipped the water stations until I took gels. I had to skip and that strategy had always worked but a new issue had occurred; The first 5 km I felt a tension and pain on my upper achilles tendon (aka calcaneal tendon). That might cost the entire race, I wouldn't risk. So, I listened to my body, paid more attention on my footing, landing and the ground. I set my mind to not to increase the speed, go by feeling instead. It was also headwindy then. So, I found a 190cm tall Korean warrior looking guy to draft for few kilometers behind him. He liked my pace when I appeared next to him and he followed me loyally for a long while (probably for 8km), until he picked up his pace and I let the skyscraper boy go. I was alone then, oh lonely boy with so many master runners who had started 5 minutes before our A group. It was around 20 km point, so I knew I was going to run the rest with my own motivation then. I kept listening to my body, didn't have any tissue pain but testicle pain due to holding my pee for a long while and adding more water by taking sips from the cups I grabbed at water stations. That was not fun at all but it reminded me of my previous 2 Leipzig marathons where I had had same experiences (due to coffee consumption and another reason). I didn't repeat myself this year but the outcome was the same! Every time I passed by feeding stations, I laughed seeing "Choco mallows" (in Germany, it was called Schokoküsse), the sweets of my childhood were given to the runners :) 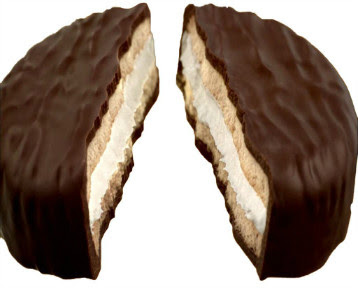 
Sometimes we have to just stay positive even in the worst case, just to be able to survive and complete what we started. So, I told myself, this full bladder is going to hold your pace back from an over-ambitious level and will let you pace yourself better, even though I was already good at pacing myself in long races. There were people at every section of the course, so peeing wasn't an option for me ( I thought of stopping while passing under a tunnel but then gave up), people were cheering me up while I was running around 15.5-16km/h speed with a smiley face. How could I stop? 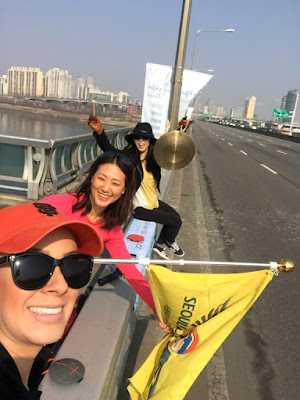 How would I disappoint the SeoulFlyers Cheer Squad waiting at km36 patiently for hours just to send us their good energy? I love you guys. How could I disappoint my trainees as their coach giving up from the distance I was experienced at? 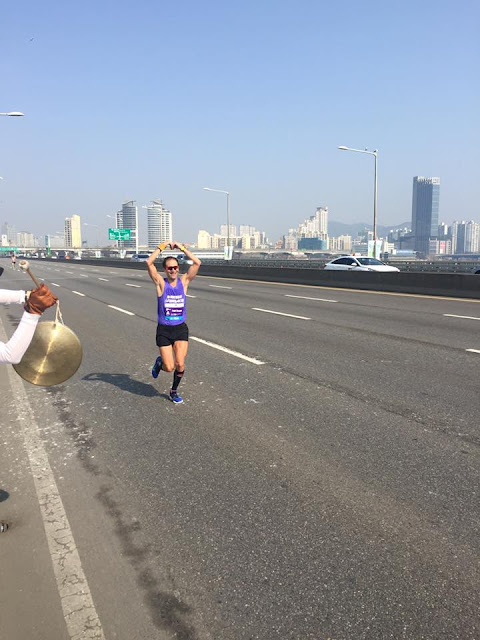 Show must go on, you've a load to carry till the finish line and dance there! As I held my effort and pace back in most of the race, it let me to feel "great" after km 35 where majority of the marathon runners start to hit the wall and slow down. After km 37, I switched on the "race mode". Even though there was going to be some climbing ahead, I should have been able to get another sub 2:50, according to my body and my watch was saying. The increased temperature was so good for my soul while it was too hot for many other runners. As I increased my speed, the audience was able to notice the difference of the effort I was able to apply while overtaking many exhausted runners and I received some good energy from few people then. Km 38 and 42 had climbs which was my talent (grade adjusted pace for km38= 3:35, for km42= 3:14) but I didn't know about the course. It was my first time there, for e.g. I didn't know that we were supposed to run almost a lap at the track right before the finish, but all happened in fast motion with many quick decisions. A youngster 10km runner was inspired and became competitive in the last 50 meters and challenged me made the officials laugh since they noticed I was finishing a marathon distance then. I finished with a 400 meter sprint at the track (3:02 average grade adjusted pace), felt great, tried to lower my heart rate while keep jogging in the crowd and found my way to the post race services. 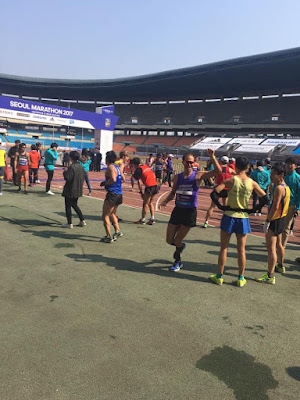 The post race kit was containing a banana, a cream filled pastry, that choco mallow! I couldn't have during my race and a medal. Another nice feature was Pocari Sweat brand's photo shooting of you with your race time on a digital panel in front of you and getting quickly printed photo of you on a can of pocari sweat drink. 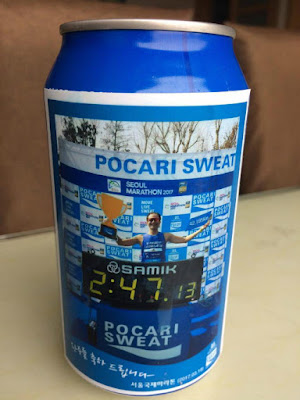 I had to drink that fluid as I desperately needed minerals then but I'm going to save that can with a photo of mine on it forever! I met Lynne after a while. She had started from another location with my successful 10k runner trainee Katie who performed very well, despite the unhealthy air pollution level and some leg pain.

Lessons taken, experience gained, while it wasn't a PB, another good race performance would remain in my mind for a while until I would perform better. Thanks for everyone who helped this huge, nice, peaceful sports event to happen, also special thanks for my strong half marathon runner trainee Tobias sponsored my race registration, Jihwa for helping with the registration and distributing the race kits, Zeny and Ron for hosting the pre-race pasta party social event, Eunjin for taking our photos, Eunjai, Junga, Ari for their cheer up support for all of us and for who else I might have forgotten to mention their names here. Thanks again. 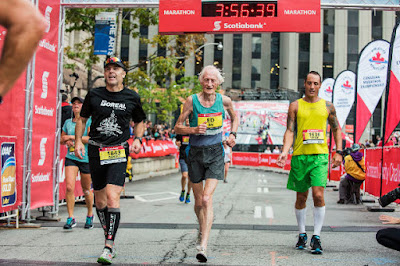 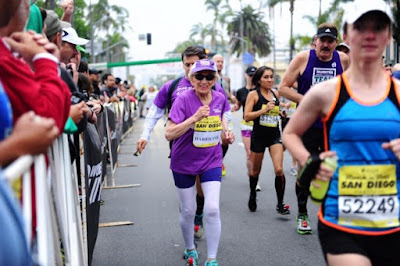 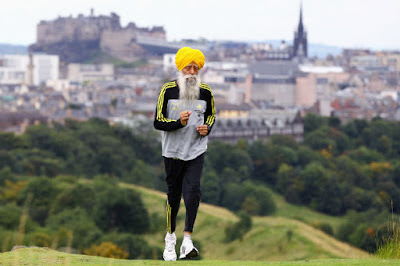